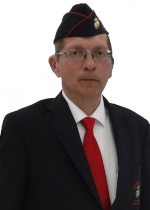 Originally from Euclid, Ohio, Robert is a graduate of Euclid Senior High School and Cleveland State University. He enlisted into the United States Marine Corps Reserve in 1978 and received training as an infantryman while pursuing his undergraduate studies in history. Upon completing those studies he entered active service in the Marine Corps in 1982 where he served in various billets and assignments until his retirement at the rank of Master Sergeant with twenty-three years of service. Following his retirement, Robert, his wife, and their seven children moved to Kill Devil Hills where he currently resides. Robert is presently employed as a support manager at the Wal-Mart store in Kitty Hawk. In addition to their children, Robert and his wife, Diane, are also the proud grandparents of five. He became a member of the Marine Corps Veterans Association in 2018 and currently serves as the acting platoon commander of the Outer Banks Platoon. In addition to his membership in the Marine Corps Veterans Association, Robert is also a charter-member of the Marine Corps League Outer Banks Detachment, a member of the Marine Bombing Squadron Six-Thirteen Association, and a member of the Dare County Veterans Advisory Council. His personal decorations include the Meritorious Service Medal, the Navy Commendation Medal with two gold stars in lieu of the second and third awards, and the Navy Achievement Medal with one gold star in lieu of a second award.